Since I was a little girl, I’ve been a big dreamer. Growing up playing tennis since the age of 3, I had big dreams. I always just assumed I was going to go pro. Haha. And to be honest, I wasn’t even in love with tennis. I mean, really, training 4 hours a day is not necessarily appealing to any child or teen especially when all their friends are off having parties and doing whatever every day. Many times, it was a drag to be training and there were days when I had a bad attitude, but I always knew what I was working towards. I wanted to get better and for some reason, in my head, I was gonna go pro.

Then, when I discovered music, something inside me came alive for the first time. I was so excited for this new way I found to express myself. All I wanted to do was write music and play my guitar and sing songs. I decided I was going to give up tennis to dedicate myself to music and go pro. Something in me always wants to “go pro”, I guess lol. What’s crazy, is that my dream was to go pro, but one of my biggest fears was being in front of people. I mean, how did I think I was I going to “go pro” if I couldn’t build up the courage to get in front of people? Lol.

So I wanted to write this blog to encourage you to dream.

Maybe it’s been years since you had a dream you wanted to achieve or maybe you dream regularly to attain your goals. Whatever it may be, I want to remind you that dreams are never wasted if they are believed in and worked for. Sometimes life takes an unexpected twist and your dream starts to look different, but it’s never wasted. Life may throw a wrench in your plans and you are forced to chase a different dream or dream anew, but that time was never wasted. Why not? Because when we chase dreams, we build character. Not only do we build our dreams, but we build ourselves. Running after your dreams takes discipline, perseverance, focus. It means you have to set priorities and create times to do the things you gotta do to work towards your goal. No matter what your dream is, if you stay true to yourself and run after it with humility and tenacity, it’s never wasted.

I’m going to share with you my own personal experience with dreaming and accepting life’s twists and turns in between it all.

Like I shared earlier, I had a dream to “go pro” in music. As a teenager and a young adult, “going pro” to me meant playing my original music in front of thousands. I wanted to write and record albums, tour those albums and make money being an artist. I wanted to tour the world!! I wanted to be the next Shakira, haha. One thing I also knew is that I wanted to stay true to myself. I didn’t want to “sell out” or do things that would be against my integrity. I made that decision and commitment at like 16 years old. I honestly don’t remember asking anyone about it, it’s just something I decided on my own. I knew I wanted to “go pro”, but more than going pro, I wanted to live humbly and have integrity.

Once I decided to commit myself to music, I did all I could to play. First, it started out with having the guts to show my original songs to people. It’s terrifying to show someone a song that you wrote from your own personal thoughts and feelings and sometimes your own experiences. It’s like letting someone hold your baby and then tell you it’s ugly. Haha. It’s scary. I believed in my dream though, and I had to push past that fear if I wanted to “go pro”.

The next fear I had was being in front of people. I was an outgoing little kid but my teen years made me shy. Shy and extremely self-conscious and insecure. So here I am writing songs with my teenage brain and emotions and I’m scared out of my mind of getting in front of people to sing those songs. As a tennis player, I could hide because I didn’t have to be super social to play since it was an individual sport, so I kinda unknowingly formed this cocoon around myself. I was comfortable singing my songs in my room. I was really good at singing my songs in my room, haha. I had to push myself to face my fears if I wanted to be an artist. I look back and think it’s so funny how my dream that I wanted to badly required me to do the thing I feared the most.

I formed like 4 different bands before I graduated high school and they were all super different styles too. We played everywhere we could. Coffee houses, festivals, people’s houses. As I kept pushing myself to get in front of people, I became less and less scared. I became more and more confident and I was starting to see that I could really see myself doing this. When I graduated high school, I asked my parents if they would be okay with me taking a year off of school to focus on music. I said that if in that year something big happens with music, I would keep pursuing it and if not, I would go back to playing tennis. It was pretty crazy. I believed and prayed so much that something would happen in that year. I also played everywhere I could and did whatever I could to play music.

In that year, I recorded a demo and that demo go into the hands of a band called the Katinas and an opportunity arose for me to record my first full-length album with them in Nashville. It was so wild. That was the sign I needed to show that I could keep pursuing music. So I went to Nashville, recorded with them and worked at Chili’s and went on tour with them and another artist named Matt Brouwer.

During my season of being in Nashville, touring and pursuing being an artist, two things happened that affected my dream and how I pursued it. First, during a stint of time when I was back in California, my cousin Mo was in a terrible car accident. Mo is my best friend and he was always my biggest support musically. He would come to all my shows and even show up to our band rehearsals. He would jam my recordings and we would dream together of going on tour and what that would be like to travel together. His accident put him in a coma and the doctors said his chances of coming out normal were slim. At that moment, I honestly didn’t know what to do with myself. We were 19. We thought we were invincible and I truly thought that I would always have Mo to dream with.

I asked God in that time if I should give up my dream. I felt like giving up. I felt like I didn’t know if I wanted to sing for God anymore because I was hurt by what happened to Mo. But in that time, when I forced myself to face what was happening and decide what I was going to do from there, I decided that I wanted to trust God. I knew the Lord had a plan in all of this and I knew if Mo would be able to talk, he would remind me that I had to trust God and keep going. So I did and Mo was and has always been a huge motivation to keep going.

The other thing that happened was that I started to learn things about myself. I started to learn that I didn’t like promoting myself or selling myself. I realized that my passion was really about the music connecting people to God. I loved seeing people be moved by not only the music but the Lord speaking to them through a song or a lyric. I loved it. In that season is when I decided to move to Houston. My friend had told me how Houston has a lot of opportunity for worship leading and great musicians. So I came initially just to record my EP, but then stayed because the Lord led me to places where I would lead worship and learn how to follow Him in that.

The reason I tell you that whole story is to say that the dream is always worth it. I believe a dream represents a piece of us that wants to be expressed. Sometimes that expression will change as life changes like my dream changed from my teenage “going pro” dream. Other times it may just turn out exactly like we dreamt it to be in the beginning. Either way, if we remain true to ourselves, are willing to learn about ourselves in the process and trust the Lord, it’s never wasted time. Life is so unexpected. All the time. We have to learn to embrace it and thrive. I learned that my teenage-artist-going-pro dream is what led to where I am now. I’m not a “pro artist”, but I am a worship leader and I do now have a career leading worship and playing music that connects people to the Lord.

I also met my husband through doing what I am doing now. He had a dream with music as well and while neither one of our dreams led us exactly to where we thought we would be, they led us to each other and being here is so much more beautiful, so much more fulfilling and life-giving. I never would have thought that my teenage dream would lead me here, but it did and I’m so grateful.

I encourage you to dream big and to work hard. Run after your dreams and at the same time, learn about yourself and let life’s twists and turns make you stronger. I hate what happened to my cousin Mo, but instead of getting bitter or depressed, I decided to let it strengthen me and inspire me to chase my dreams even more. Who knows where life will take you, but with dreams in your heart, there will always be pieces of you waiting to be expressed. Don’t bury them. Instead, dig them out and let them grow. Be open to where it takes you. 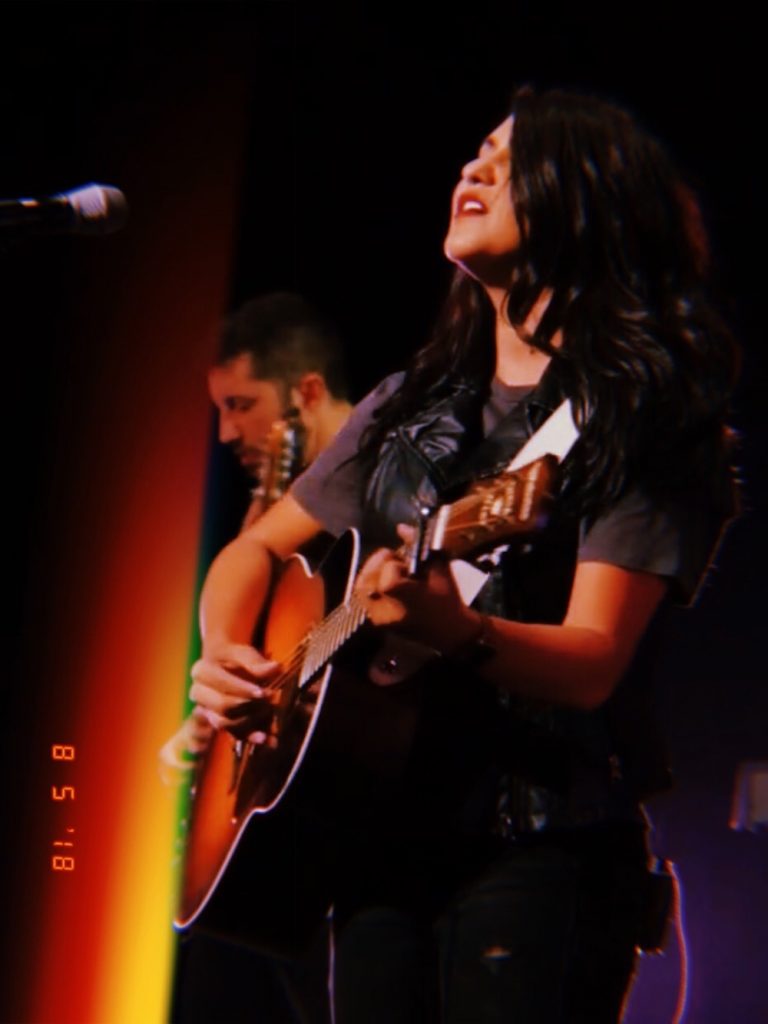